MacOS Monterey will have a feature dubbed Universal Control. It will allow you to make your iPad and MacBook work in unison and share features.

During June’s Apple WWDC 2021 we learned that a bunch of interesting concepts and updates are on their way. Among all else, you could catch a glimpse of iOS 15, learn that an iPhone could be used instead of a passport at the airport, and so forth.

One of the main attractions at the high-tech fair was macOS Monterey, which is going to see the light sometime this fall. It will bring new features to FaceTime, receive the Shortcuts app, allow you to group browser tabs in Safari, and more.

But what really aroused the intrigue was the Universal Control feature. This know-how will unify the Apple ecosystem even more by letting you access your iPad from a MacBook. Let’s dive in and check its main benefits.

Universal Control draws inspiration — as well as perhaps inherits pieces of code — from Continuity and Handoff functions. Both have been around for a while now.

Here’s how the whole operation will work:

And if you want to resume control of the laptop, simply drag the arrow to the MacBook — back to the right, in other words.

There’s really no cloud alchemy involved here. The mode is unlocked via Bluetooth signal. As soon as both gadgets “verify” each other, they are ready to click and synchronize.

By default, Universal Control will assume that you want to access the last iPad that you’ve fiddled with. In case you have a whole funky bunch of those, you can add 2 more iPads to this party via the same procedure. 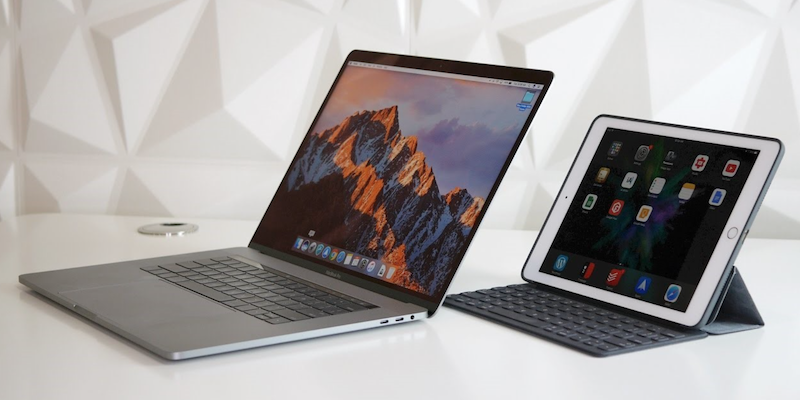 One major benefit that Universal Control will grant you is the painless file exchange. You can quickly drag-and-drop photos and screenshots, docs made in Komodo or Vim, voice memos or sticky notes, and so on. The files can go in either direction.

Again, transferring media doesn’t take the cloud path — instead, it requires USB or Wi-Fi direct. Plus, when you’re sending some stuff from an iPad, you need to have a file manager open: File Hub, MyMedia, Files, Pocket Drive, and others. (All available on App Store).

Another cool trick is that you’ll be able to employ a mouse arrow on your iPad. This is especially handy if, for example, you want to rearrange your file catalogue on the iPad. It’d also be cool if we could actually use the iPad apps while working from a MacBook.

Finishing a video montage with VivaCut or adding touches to an essay with Scrivener could be handy — sometimes mobile apps are easier and more intuitive to operate than their laptop analogs.

What Else Is Going to Change?

As we’ve mentioned, Apple’s passion for innovation has been reignited. For example, the Maps app will get a revamp with more detail in major cities: streets, small neighborhoods, alleys, and so on. 3D mode for landmarks will also be there.

Photos app will get some tweaks that will take your Memories experience to another level, AirPlay will allow browsing content on synced gizmos, and the Focus app will eliminate all distractions while you’re busy with your work.

Universal control and other features seem to be a good deal. And MacOS Monterey premier is pretty much around the corner. Which know-hows are you excited about the most? Let us know in the comments!

Subscribe to our weekly Newsletter and receive updates via email.

Many WhatsApp users probably know how annoying listening to...

(c) 2022 AllApps.World. All Rights Reserved.
AllAppsWorld is a ultimate catalog of best mobile apps and games for Android and iOS devices. Only top-rated, curated apps and games! Please note that AllAppsWorld is not affiliated with any software developer unless specified otherwise. All the software you can find in our catalog is genuine and has not been modified in any way.
Scroll to Top
Games
Apps
Choose
We use unpersonalized cookies to keep our site working and collect statistics for marketing purposes.
See the Privacy and Cookie Policy here. Accept